Radiator caps, or mascots, either came as standard equipment or were proposed by the manufacturer as a luxury accessory. They were generally made of bronze or chrome, and took pride of place on the bonnet, giving the vehicle its personal identity. Lalique chose to innovate, using glass in place of metal for the thirty or so mascots he designed between 1925 and 1931. The majority were inspired by nature, but with the influence of Art Deco the master glassmaker also produced some geometric models. In the words of his London distributor, Breves Galleries, Lalique’s radiator mascots achieved «a rare combination of beauty and distinction».

These mascots often expressed strength, speed or endurance. The Grande Libellule was one of the motifs that René Lalique used throughout his career, on jewellery, boxes and other objects. In the same year, he also designed a Petite Libellule mascot, with folded wings.

By the way: On 22 January 1929 he applied for a patent for a lighting system for the mascots. The system was fitted to a dynamo on the vehicle, and thanks to circular filters of different colours located in the metal base, the mascot would light up at night. 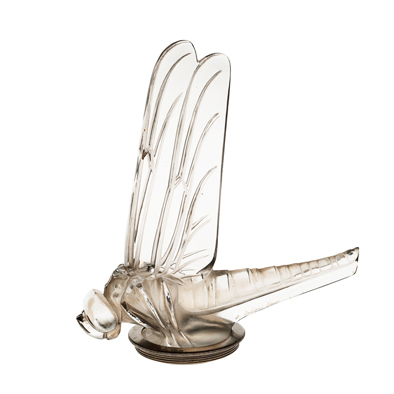