René Lalique was at the height of his career as a master jeweller when, in 1908, he created his first perfume bottles. From the start, Lalique’s bottle designs paid particular attention to the stopper, whose motif represented the theme of the decor.

Lalique created bottles for specific fragrances at the request of the perfume houses of the day. But he also designed empty perfume bottles which were sold in his own and other stores, for the general public.

The Clairefontaine bottle was not created for any particular perfume, and could be filled with whatever fragrance the customer desired. Its shape resembles that of a vase containing four sprigs of lily of the valley. The cut flower motif featured in earlier models of tiara flower stoppers from 1910, such as the Myosotis (Forget-me-not) stopper in 1919. This kind of composition also features in other types of objects, such as the Roses lamp in 1921.

By the way: The reason behind the names of René Lalique’s creations is not always easy to find. We know that in 1898 he bought a property at Clairefontaine, in the Yvelines department close to Paris, in which he installed a workshop. This could be why he chose the name for the Clairefontaine bottle. 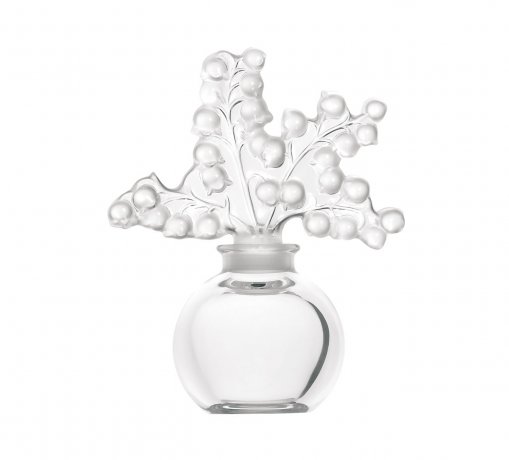